Skip to content
Our team independently selects, reviews, and identifies the best products. We may earn affiliate commissions on purchases made from links on this page. Learn more. This post was updated on January 20, 2022 Traditional houses were built with studs as the pillars to support the plasterboards until modern house designs kicked in. Surprisingly, some modern houses have studs too, but putting up these houses nowadays is a bit expensive.

As such, if you live in a traditional house or a modern house built with studs, how to find a stud in a plaster wall if you keenly inspect it isn’t hard at all.

In both, you would like to fix some little things on the interior wall to make it appealing.

You may want to fix some shelves to store your books, papers, or utensils. In another case, you may want to mount your television on the wall or fix a wall mirror.

Mounting or fixing heavy objects requires nails or screws drilled on the stud to make it firm. You wouldn’t want to come from work and find your 48 inches TV fell off and broke the screen.

To carry out all these processes, you’ll first need to spot where the studs are located under the plaster. It’s a simple process, but it needs some patience. Luckily, in this article, you’ll learn all the processes easily.

But before you would learn to locate a stud, it’s good to understand better how the traditional houses were built.

Until the mid-1970s, houses in the US, United Kingdom, and several other countries were made with lath and plaster on the interior. Closely spaced woods or wire mesh were nailed to the studs to support the plaster.

A plaster was made of powdered lime, sand, and horsehair used as fibre to form a smooth wall surface. Then, the wet plaster was applied in around two or three coats that formed a firm wall.

Excluding the plasterboards, the plaster would be around one inch thick. The method was most used because of some advantages like;

Ways How to Find a Stud in a Plaster Wall

There are several methods you can use to find a stud in your plaster wall, they are;

1. Use a Stud Finder

Some stud finders are electric, while others may be magnetic. Magnetic studs detect the nails or screws that attach the wallboards to the stud. 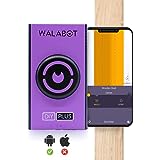 On the other hand, for the electric, they use radar technology to detect electric wires, metallic plumbing pipes, or the studs under the plaster.

By locating an electrical switch, socket, or meter box, you can find a stud near them. It’s possible because they are mostly installed near the studs for the screws to hold them firmly.

To confirm the location of the stud, ensure power is switched off. Afterward, open the cover and keenly check where the inner screws are driven. You will notice a stud that, by estimation, it runs vertically from the bottom to the top.

After locating the first stud, mark the area and try locating the second. Mostly, the houses were built with a stud spacing of 16 inches or 24 inches.

3. Knock on the Wall

Using your knuckle or a metal rod, you can knock on the wall to detect the stud location by echo sound.

You will note a resonating sound on the spaces with no studs due to hollow space after the wall plasterboard.  The sound changes to dull thud-like if you get around the stud location.

To carry out the process, move slowly horizontally as you knock on the wall and be keen to note the echo change.

After locating the first stud, find the second and measure by 16 or 24 inches spacing to confirm the patterns.

Read: Magnetic stud finder how to use

4. Use a Metal Detector

A metal detector uses a magnet to locate the nails or screws inside the plaster that attaches the plasterboards to the studs.

Unfortunately, a metal detector may mislead you if the plaster is laid on a metallic wire mesh or cast iron plumbing pipes.

Find a strong magnet in the house and tie it with a string. You can hold the string and move the magnet horizontally across the wall. Be slow and keen to note where the magnet is attracted because there is a possibility of a nail or a screw.

Second, spot the area where the magnet attracts and move vertically to confirm if it’s a stud. Studs mostly run from top to bottom, and the plasterboards attaching nails can be spotted on various stud areas.

If the magnet is attracted to several spots in a linear sequence, note it’s a stud.

6. Search for Dimples and Bumps

The plaster wasn’t of the best quality like the modern ones, and secondly, it was laid on some parts with hollow spaces inside after the board. For this reason, you may notice some nail dimples or stud bumps if you keenly inspect the wall.

Once you note the stud bumps, keenly check within 16 to 24 inches spacing to confirm the next. You will have an assurance you’ve spotted a stud.

How Wide Should Studs Be?

Studs are vertical boards used as house pillars or poles. They usually measure one and a half inches thick and three and a half inches wide. Due to this thickness, they were thought to be strong enough to support the plaster walls when installed at certain spacing.

How Tall Can Studs Be?

How Far Should a Screw Go Into a Stud?

It isn’t necessary to drive the screw deeper into the stud, assuming the plumbing pipes and electric wires run around the studs in traditional houses. Just about 1 to 1.5 of the screw from the plaster surface is firm enough.

Is it bad to Drill into the Stud?

Drilling a wide hole may weaken the stud. However, if you are drilling a small hole for the electric wires, ensure you accurately find a stud in a plaster wall and target the centre to ensure you don’t weaken it.